I just finished the inking of the last page of the comic book, UNDERCOVER COCKROACH - SECRET AGENT 69. It took a long time in getting here but it was certainly worth the effort. :-)
Now to get it scanned, drop in the word balloons and text and send it off to LA. Get ready Shea and Cheryl.
Posted by Mike Edholm at 1:20 PM No comments:

Its up and running and I'm thrilled!
Please check it out and let me know what you think.
Thanks,
ME
Posted by Mike Edholm at 5:56 PM No comments: 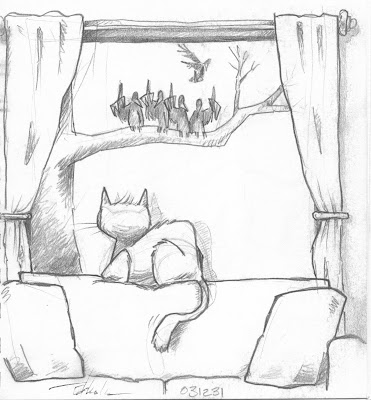 I remembered this sketch that I did in 2003. It was Joey's habit to sit on the back of the sofa at my old house and stare out the large picture window (larger than in the sketch) and watch the yard and especially the birds for hours on end.
The thought is that the birds had an idea or two regarding his voyeurism.
Posted by Mike Edholm at 11:46 AM No comments: 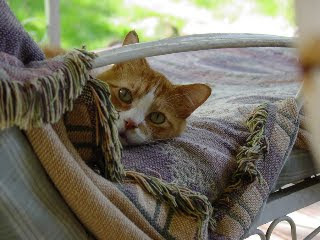 Friday, June 17, 2011. At 4:15 a.m., I just lost one of my little buddies. My cat, Joey, died. He'd been sick since last Saturday, and actually about 8-months before that, with a mass on one of his kidneys, so the vet tells me. He went in much the same way as my father when he died. Those long, gasping breaths with a long pause in between. I tried calling the vet last night, but it was after 10:00 p.m. and they had all gone for the day. The service suggested I call in the morning.
Joey lay next to the wall in the hallway right outside my bedroom. He called out (to me) shortly after 3:30. I'd spent many nights this past week with him so it was natural to sit with him, bring him a small bowl of water, or some fresh baby food (chicken with gravy, no veggies or garlic). But he just wanted me to be with him, I think. I lay beside him on the floor, gently petting him and speaking softly to him.
It always hurts to lose someone you care about, especially a loved-one. Joey and Gus and I have been a little family now for the past 16-years. I love them both. This hurts deeply.

God's speed, Joey. We'll meet again on the other side.
I love you, Joey.
Posted by Mike Edholm at 3:08 AM No comments: